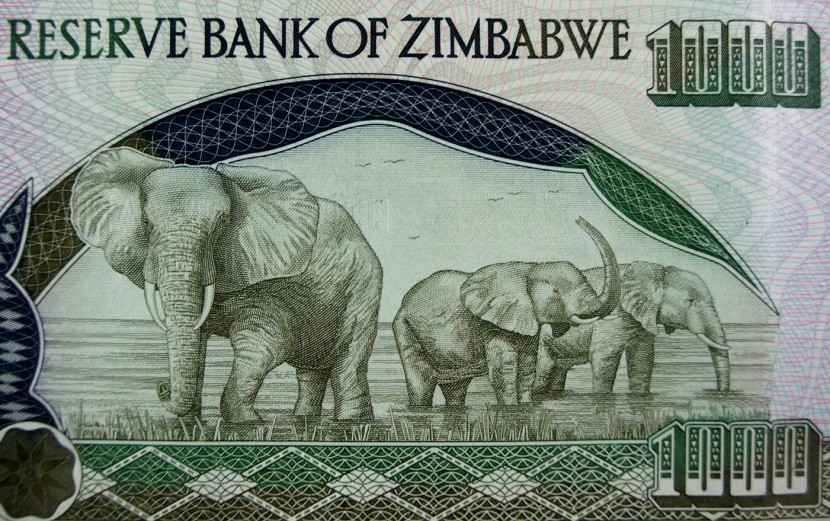 The 2003 Zimbabwe 1000 Bill pre-inflation note features Elephants.  In many African countries the Elephant is a symbol of strength and power.  The Elephant is admired for its size, stamina, spirit, and loyalty.

In 1980 the Zimbabwean Dollar currency replaced the Rhodesian Dollar as official tender in the mineral rich country of Zimbabwe.  The initial value was higher than the U.S dollar.  Many years of political instability in Zimbabwe lead to extreme hyper-inflation in the mid to late 2000’s.   Finally in 2009 the Zimbabwean Dollar completely collapsed and was no longer used in Zimbabwe.  Zimbabweans now use the U.S dollar, the Euro, Pound Sterling, South African Rand, and the Botswana Pul as money in Zimbabwe.
The 2003 Zimbabwe 1000 Dollar Bill was  largest denomination of the First Dollar Series of the Zimbabwean Dollar currency.  Rapid hyper-inflation led to currency reform in 2006 making the 2003 Zimbabwe 1000 bill obsolete.
Only 3 years in printing, rare, and obsolete the 2003 Zimbabwe 1000 Dollar Bill is a historical reminder of hyper-inflation and a collectible memory of Zimbabwe money and African Elephants!
Banknotes are more than just money.  A country’s currency tells a story of the culture and history of a country.  In our current era of digital money , actual printing of banknotes is becoming obsolete.  Increasingly rare banknotes not only provide collectible memories but also can be small investments.
Visit my store to buy this or other historical banknotes!